Life in the country

05 Mar Life in the country

Posted at 20:05h in Adventure of life, On the trail by alison 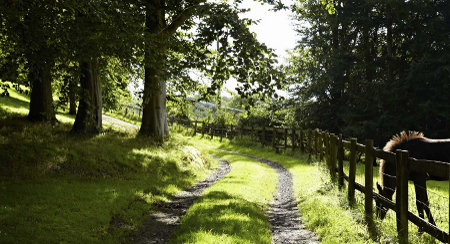 I was out walking in the woods at the weekend when I heard a really awful shrill cry. Thinking it may have been an injured bird I went to walk on.

The next set of screams I heard can only be described as blood curdling. I thought it was a dog, injured and in pain and clearly there was no way I was going to leave any animal in the sort of state the creature who had made the sound, sounded in.

As I ran through the woods my heart was pounding heavily, not sure of what I would find. And the shrill screams became more frantic.

As I approached a wire fence I could see a Muntjac deer caught awkwardly in the wire fence and terrified, with a small terrier dog attempting to, well, yes. I don’t think I can condone or recommend what I did, but testing the dog’s reaction and nature as best I could, I pulled it off so David could free the deer.

It wasn’t easy holding onto the dog. It was less easy for David to try and convince the struggling and distressed deer that it needed to be pushed backwards to escape the tight grip of the wire. But he did it and it bounded away.

That left the stray dog. Who by now seemed oblivious to the trouble he had caused and was happy to have my scarf tied onto its collar as a make-shift lead to be lead away. He seemed to have no idea of which way was home so that wasn’t going to work. In fact, he seemed quite happy to be out for a stroll! Eventually we found someone who knew his owner and had been looking for him so all ended well in the end.

Why am I sharing this story? Well, it was just one of those things which happened and I wanted to share the story with you. It had been amazing to be so close to a deer. Muntjac are the smallest deer in the UK and they are often called the “barking deer” (I see why). When alarmed they give an almost blood curdling scream many confuse for a fox or dogs.

Knowing Muntjac deer aren’t native to our lands I did some further research when I got home. The Muntjac were bought to England from China,  to Woburn in the 1970,s and escaped and have bred.

Some people do hate the Muntjac deer as they can be very destructive to our tree bark. But I was just left in a renewed awe of nature and I’d had a pretty distinct reminder of how harsh the lessons and ways of nature can sometimes be.